What to do about RO2 exams and stress What is it about exams and stress?

Maybe it’s time to have a look at what causes you stress, and what you can do about it. Because it is true to say but no matter what, most of our stress is self-imposed, and usually because of our approach to what’s going on around us – our thinking patterns, rather than there being a real source of danger.

If you’re someone who finds that you get wound up by things; if other people occasionally accuse you of being a grumpy old man, or woman, and if you are interested in learning how stay calm in situations that usually drive you nuts, you might be interested in the following exercises.

First we have an exercise to identify exactly what triggers a negative thought, a thought that stresses you, because the way you think about things that happen, and the meaning you give those events, affect your experience of life itself.

Your automatic negative thoughts are indicative of your beliefs, and by noticing them you can begin to see how they are leading to specific feelings about the situation. Do this exercise first, because later you can learn how to change the unhelpful beliefs, but first let’s identify what those beliefs are, because it’s not the event itself which causes you stress, but the meaning (thoughts, beliefs, attitudes) you attach to it.

Trigger: Co-worker asking for your help, yet again with something they ought to be taking responsibility for themselves.

Automatic negative thought: Why can’t they just get on with it? I’ve got too much to do already, without having to do their work for them as well.

Trigger: Just heard the news that you’ve failed an exam for the 2nd time.

Automatic negative thought: I just can’t do it. I’m not good enough. I’ll never get my diploma. I’ll lose my job.

And that’s all you have to do for that first exercise. You just simply identify the trigger, the automatic thought and the resulting experience.

When you’ve done this for a few days, and I would recommend writing it down, because then you begin to see the patterns, it’s time to move on to the second exercise, to find out the thinking style that you usually gravitate towards and that might be less than helpful for you.

Negative emotions come from negative ideas and thoughts, and usually from criticism of yourself, of the world or of the future. If you know in your heart of hearts, that dwelling on negative thoughts is a bit of a habit of yours, then you might decide to monitor them.

In that case, what you need to do is to write down every negative thought or idea that you have and then identify which of the following thinking styles you’re using when having that negative idea. It will help you to identify your negative thinking pattern and style. (All of these exercises of course, are designed to have you turn it all around and have a better quality of life, but for now we’re focusing on what you’re actually doing rather than what you can do about it which will come in next week’s blog.)

So let’s think of some examples. In fact, let’s use the examples we started with in the earlier exercise. Again, these are made up. I hope to give you an idea of how to do it for yourself.

Negative thought/idea: Why can’t they just get on with it? I’ve got too much to do already, without having to do their work for them as well.

Unhelpful thinking style: Which of the 7 do think that would be?

Is it criticising myself? No.

Is it focusing on bad things? Possibly.

Is it negative predictions, of a gloomy future? Not really.

How about catastrophic thinking? Not really.

Mind reading? Definitely not. There is no suggestion that the other person thinks badly of me, so not that one.

Number 6? Taking all the blame? No not that one.

Unhelpfully high standards all rules? Ah yes. Surely that one. I’m saying that they’re supposed to do the work themselves. They ought to be able to do it themselves. My rule is they shouldn’t be bothering me.

Okay, so the unhelpful thinking styles then for this particular example might be: number 2 and number 7. (Focusing on bad things and having unhelpfully high standards and rules.)

That’s all you have to do for this particular exercise. Notice that we’re still not doing anything about it – we’re just identifying where the problem is. Let’s try the second example.

Negative thought/idea: I just can’t do it. I’m not good enough. I’ll never get my diploma. I’ll lose my job.

I reckon you could tick just about all of them!

It’s definitely biased against the self.

It’s definitely focusing on bad things and creating a gloomy future too.

It’s entirely possible that this sort of thinking that the embarrassment of it all comes from the fear that others think badly of me.

Not sure about number 6. Taking all the responsibility and blame for things that aren’t your fault. That doesn’t seem relevant here really.

And possibly number 7, unhelpfully high standards – maybe I have rules about where I should be at this stage, with my exams, that I ought to have passed my last exam, that I must pass the exam.

Maybe I’m beating myself up for not having passed them so far, instead of regarding this as feedback and taking a different course of action.

Use these two exercises, the first one for at least a few days and then move on to the second when you begin to notice your patterns.

And then you’ll be ready for the final exercise I’ll describe in next week’s blog.

Find out more about becoming a member and watch the free recorded webinar to see how Genius Material can help you pass your exams. Click on the image below to register. 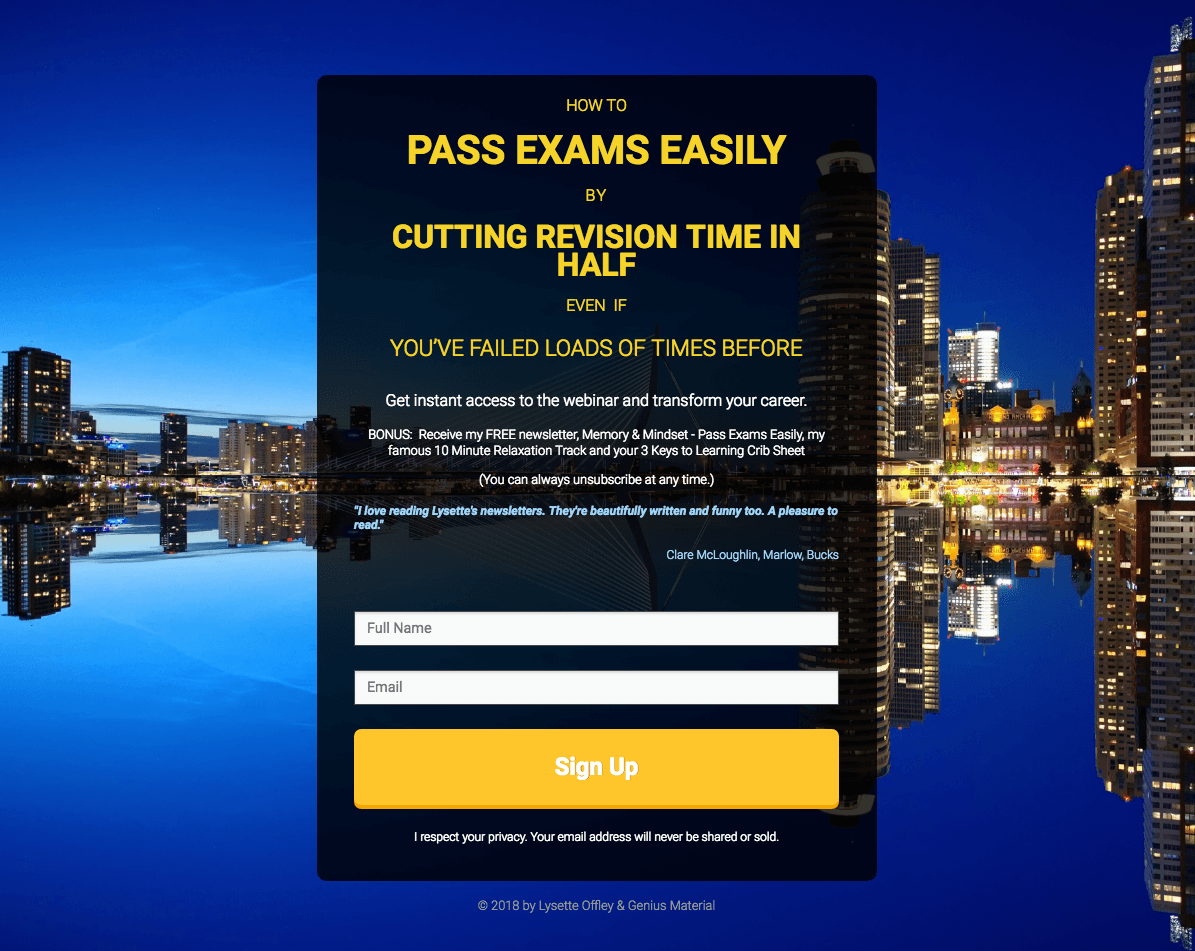